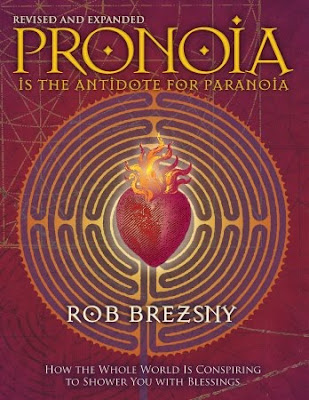 The new revised and expanded version of Pronoia by Rob Breszny is now out.

I loved the first edition of Pronoia, though I must admit I was a bit reluctant to start it as it looked, frankly, New Age, the monstrous love child of Louise Hay (my absolute bete noir) and Pollyanna (who although she is always 'glad, glad, glad' has an endearing quality).

But intrigued, I did read it and found it so refreshing.It lifted my spirits, reminding me of how there is an energy flowing into/from/through the Universe which seeks to create, love, celebrate, empower and transform.

Pronoia, as I understand it, is not about turning away from the dark stuff of pain and injustice but actually facing it exactly as it is, in the full knowledge that I have the power to make a real difference, to be the change I want to see in the world.

It is definitely not to say that suffering is an illusion or unimportant. In fact the exact opposite. It is to engage with it in the full knowledge that the flow of life is on your side. It is engaging with this stuff while focusing upon what is good, joyful, and not valorising despair and cynicism as the truth.

I am minded of the words of George Fox (Founder of the Quakers),written in the seventeenth century describing an 'opening' (vision)he had....

Sure there is an ocean of darkness but it is finite whereas the ocean of light and love is infinite and the former is ultimately extinguished by the latter.

In the Alternatives to Violence Project which trains people to engage with and transform violence, one of its principles is Expect the Best. Nothing naive or facile about this powerful tool which has been used in some desperately violent conflicts and their aftermath.

If we are to change the world then let us do it in a spirit of deep care, gratitude and appreciation, from a position of wild humour, ridiculously extravagant generosity and divinely foolish optimism.

Reading Pronoia for me was not just about absorbing ideas but an experience in itself, a fun ride. I look forward to reading this new edition.